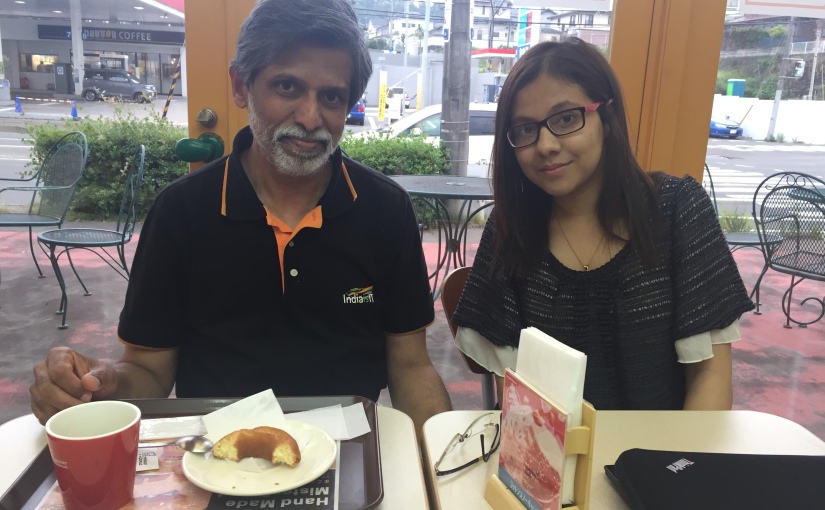 On June 19th, The Sentinel had the opportunity to interact with Dr. Glenn Mansfield Keeni, Ideator of Tohoku University International Festival- ‘Kokusai Matsuri’, which is in its 31st year now. To the newspaper, it was a great pleasure to ask him first-hand questions on how the actual idea was born and the story behind it.

Q: How long have you been in Japan and why Japan at the first place?

Ans: That has been a very long time ago; it is going to be 32 years in October. Actually Japan was very special. I never had an inclination towards any other places if it was abroad except for Japan. I did my Bachelors and Masters in India itself and then started working in TATA Consultancy Services (TCS). One of the intentions was to join the 5th generation computer system which was happening in Japan that time and the  other was to take some day off from work and experiencing something out of my own country. I applied for the only scholarship (Monbukagakusho) available that time and got accepted. I flew to Japan right after that!

Q: When and how did the idea of Indian Festival – ‘Indo Matsuri’- struck you?

Ans: The main idea was a brainchild of my elder sister- Gargi Keeni. She came here before me and was the second Indian at the university. Gradually, the number of Indian students increased to 6 and my sister always had the intention to do an Indian festival. There were TUFSA parties which constantly relied on western themes and had food and music for the people. My sister after seeing the amount of interaction and liveliness during the parties, came up with the idea of an Indian festival. She was very enthusiastic about the whole objective and introduced her plan to six of us at first.

Ans: The festival itself was way more influential than we expected it to be. We thought of inviting as many people as we can and estimated about 600 guests. From students of the University to school students and kindergarten kids nearby, everybody were invited. If you ask me about the participation of international and local students, I would say somewhat to our surprise that there were about 100 international people coming to the venue the day before the festival for helping us with the preparations. We were amazed to see the amount of energy in the atmosphere from the day before the festival. Everyone was extremely helpful and supported the core Indian members throughout the preparation process. On the other hand we gathered around 60 volunteers and so together we had a greater support force than we ever imagined. It was amazing!

Q: Talking of the international festival that occurs every year now, how did the alteration took place from Indian to International Festival?

Ans: The next year after the Indian Festival, I became the president of TUFSA. It struck me that the idea of evolving the ‘Indo-Matsuri’ to an International Festival would be beneficial and exciting to all the people. Already, in the Indian Festival there were people around the world helping us and hence, it had a tinge of internationalization right from the beginning and I wanted to execute the idea to a better fiesta in the subsequent year with the addition of several countries coming together as one.

Ans: This is the 2nd time the festival has taken place in the Kawauchi Hagi hall and I think  it is one of the best changes in the venue of the festival. The Hagi hall itself is extremely beautiful and is perfect for the festival. I think every other person from children to grandparents should have the accessibility to the festival and with each year, the festival seems to be more and more successful in achieving the same. Another major change would be the vast number of undergraduate students participating in the festival. At our time it was mostly the senior students who organized it but I am glad the trend is changing.

Q: As a pioneer of the idea what aspects would you like to perceive in the development of the festival?

Ans: I would like to see the cultural side to fuse in, a bit more into the festival. I know that the cultural exchange that takes place each year at the festival is humongous however, what I really want to experience is the interaction within those cultures. For the visitors, together with food, it would be a pleasure to see them take something from the cultural point of view with them back home.

Q: What message and advice would you like to send to the visitors and the organizing committee today?

Ans: It might be hard to say that the world is one but these kind of festivals which are a result of the immense hard work of  common people are ones which ignite ideas. It is definitely not easy to bring so cultures , traditions and love together under one roof but ‘The World is One’ is an ideal goal towards which we should head to. To all the visitors who visit and spend time in the festival, I would want them to take something very special with them as they leave the festival. So next time, all the organizing committee members, volunteers, participants and visitors can connect to each other with those bits of memory.

Q: How do you see the change in internationalization of Tohoku University compared to your educational period?

Ans: A huge difference indeed. The years brought a huge change in the amount of internationalization. If compared, it is difficult to imagine actually. If you compare the number of foreigners you can easily observe the change in quantity. From Tohoku University to all over Sendai, the quantity and international relations have undoubtedly increased. But in order to compare internationalization I think, more facts should be differentiated. I always believe that a person can reach anywhere but the sum of internationalization that the person radiates depends on him solely. I can only say the target is not very far.

Q: You have undertaken your M.S. in Particle Physics and also your M.E. in Physical Engineering. After that you went on to earn your Doctoral Degree in information sciences. Why did you want to make such major shifts in your fields?

Ans: Among all the professions I, really admire the medical profession for the determination and affection it requires. However, I was always a physics person to be honest. At that time, physics individually was not really easily accessible and so I thought why not direct myself to information sciences which to a great extent relied on my favourite field as well as provided me extra dimensions to enlighten myself. Luckily, I was there at the right place at the right time.

Q: After graduation how did you make your way to the industrial field and how difficult was it?

Ans: It is very difficult to express within a few words. There have been lot of ups and downs in the process itself. My professor started to work with networking at the time of my graduation and asked me to participate. I took the chance and then after a while started working for internet. I would say I tried to grab opportunities which led me to what I do now. With every obstacle, I decided to take the idea further.

Q: How often do you visit India?

Q: What message would you like to send to the readers of Sentinel?

Ans: Well, I am not really good with messages but very briefly, I would like to appreciate the young generation today. To the new generation youngsters I would rather say- Never stop chasing your drams. You don’t realize how important you are in this era. The whole world is counting on each and every one of you. You are the future leaders of the world. So grab as many opportunities as you can and widen your knowledge and hearts. I reckon the Earth will be a better place to live in future.

This site uses Akismet to reduce spam. Learn how your comment data is processed.